Showing posts with the label American Banker
Show all

Is capital haul too much of a good thing for Black-run banks? By John Reosti, American Banker Newspaper, June 24, 2020 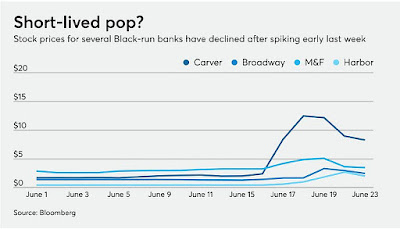 An effort encouraging investors to buy stock in Black-run banks could create new challenges for
the leaders of those companies.


The Buying Black movement, which took root last week, led to sharp increases in the shares of
companies such as Broadway Financial in Los Angeles, Carver Bancorp in New York and M&F
Bancorp in Durham, N.C.

An influx of new investors could increase pressure to improve shareholder returns, while any
strategic effort designed to generate higher profits could also draw a backlash. At the same time,
markets are fickle — most shares in Black-run banks have fallen significantly in recent days as
some existing shareholders cashed out.

Indeed, Broadway's biggest investor — who had been pushing for the company's sale —
abruptly sold all of its stock after the value of its holdings soared.

Leaders of Black-run banks contend that what they need more than capital is more partnerships
with bigger banks to extend their reach to underserved customers.

June 09, 2014
Anyone still waiting for justice with respect to the role that large banks played in the financial crisis had to be disappointed in a New York appeals court's ruling in a case involving a settlement agreement between Citigroup Global Markets and the Securities and Exchange Commission. Read more at: